The ruling by the
Taraba State Governorship Election Petition Tribunal declaring Senator
(Hajiya) Aisha Al-Hassan of the All Progressives Congress, the duly
elected Governor of Taraba State is a victory for democracy and a
triumph of the People’s will.
It is a clear
affirmation that no matter how long it takes, never will the verdict of
the people during elections be manipulated against their popular choice
as expressed through the ballot box. Indeed, by the ruling, it has been
proven that in a true democracy, sovereignty ultimately resides with the
inviolable will of the people.

Accordingly, I commend
the Judiciary for its boldness and unfettered commitment to the sacred
principles of honour, good conscience and the truth. Indeed, it has
shown that its role as the defender of the defenseless in a democracy
remains strong and sacred.
I call on Nigerian
women to rally support for the Tribunal’s ruling, especially in the
circumstances that it remains a priceless watershed in our political
history for our great Party to produce the first elected female Governor
in Nigeria as desired and manifestly by the electorate in Taraba State.
Finally, I exhort the
Judiciary to remain alive to its avowed commitment to dispensing justice
to all, man or woman, rich or poor, without fear or favour especially,
in our collective effort to enthrone and sustain an enduring
constitutional democracy rooted in free and fair elections.,respect for
the rule of law and the wishes of the people. 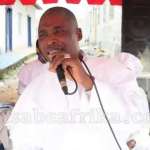