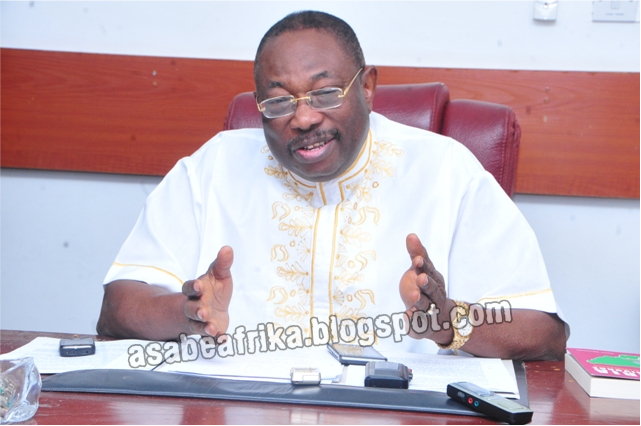 The two-time
minister of science and technology (1995-1999) and pioneer commandant of the Nigerian Army War College who have
consistently intervened in the affairs of the nation through intellectual
research and policy driven literatures is writing his sixth book based on the
current fear in the polity due to the level of the Boko Haram Insurgence; giving few urgent rescue imperatives that
could salvage the situation before it degenerates into a bigger monster of a
crisis that could lead the country into a 50 years civil unrest.

The General and his books…

It is a
great irony that General Momah who
titled his last book “Nigeria: Beyond Divorce” which was
published to commemorate his 70th birthday on Saturday July 6th
2013 is releasing a new one with a fearful title “Nigeria on the Brink”.
The 222
pages book with 30 chapters did an elaborate analysis of the birth of Nigeria
before the 1914 amalgamation (Forced
Marriage) by British colonial managers, tracing the high and low moments of the
100 years marriage of northern and southern Nigeria into the 1960 independence.
The book did a high level intellectual
research into the stunted democratic flow of a racing nationhood through
military interventions in the last 32 years and the political coloration of the
350 ethnic nationalities that kept seeking the center as a means to break
nationhood than mold upon the work of heroes past.
“Nigeria on the brink” treated several issues ranging from
massive corruption by drivers of the economy both in the military and civilian
era, epileptic and inept leadership at the center, stranded educational
policies that has relegated merit to the background and uplifted mediocrity to
the front row. Militia ethnic threats which the author fears might be the real
albatross for the break up of a one indivisible Nigeria after hundred years of
marriage (1914-2014)

Issues of the moment…
The 72 years
old statesman and veteran of policy making who was one of the best Nigerian
ministers of science and technology during his tenure between 1995 and 1999
raised some very strong questions that needed urgent answers in the book. Hear him;
“With the ongoing savagery and reign of
terror by Boko-Haram, Nigeria has
never had it so bad. Indeed the unfolding macabre and the collapse of Nigeria’s
defenses without a fight prompted the writing of this book. It is the author’s
wish to alert fellow patriots on the formidable threat to Nigeria’s corporate
existence. As at today (31st of December 2014) the threat has become
deadly serious considering the ease with which Boko Haram captured towns and villages in the North East. Their
guts in declaring Islamic Caliphate, the affront in renaming the towns of Gwoza and Mubi, the insult in hoisting their flag, the humiliation in raping
our daughters and wives, the savagery in slitting the throats of our brave men,
the temerity in taking our women in their vehicles to the battle front, and the
impunity in invading prisons close to Abuja
and releasing their colleagues plus other prisoners are very disgusting. These
brazen actions make one wonder what happened to our once formidable Armed
Forces of Nigeria-The Giant of Africa? Why are the forces collapsing like a
pack of cards? Why are hunters now our first line forces? Why are the
authorities so concerned in dancing and seeing in election jingles while the
reason for the election is now a mirage? Why is our council of state staring
into space while the ship of state is sinking? Why are Nigerians keeping mute
and not even a passive demonstration? Why are people just praying without
backing it up with action? Why are our legislators being tear-gassed by police
in the National Assembly premises? Why are Boko
Haram so brazenly confident and the Nigerian Government so confusingly
despondent? Why has Ekiti State
House of Assembly without forming a quorum impeached its speaker? Why is the
Naira so battered in value that dirty naira notes are being sold at huge profit
for mint notes? Why are the lower denomination of N5, N10, N20 and N50 so
scarce that businesses at the grass root have been paralyzed? The situation is
so bad that sweets, chewing gum and Tom-Tom are now
being given in place of unavailable lower denominations. Why is Nigeria in this
disgraceful and embarrassing trade by barter in 21st century “oil
rich” Nigeria? Why has governance at the federal level gone comatose? Are we
now in a banana republic?
The above
questions and many more are some of the cogent reasons General Momah who himself has been a stake holder in the affairs of
nation building put together the book with accurate answers, suggestions and
solutions on how to tackle the problems at hand. The author recommends the new
book for leaders and policy makers across the length and breadth of the
country, saying “it is an urgent document
for leaders and policy makers to digest at this trying moment. Especially those
that seek to take the country out of its present doldrums”
General Momah who for the first time made a mind
blowing exposure of his close shave with the April 22nd Orka’s coup in his new book also
treated the issues of Power, Poor Army, Poor Economy, Boko Haram, Oil boom and
oil doom, Incredible Census, Election rigging, National Confab report and other
serious issues at the heart on bringing Nigeria down.
The author proffered
solutions that he feels could halt the break down of a great country. He
equally suggested the establishment of a United State of Nigeria (USN) through
an independent source of income with Agriculture as the major driver of
economy.

What we need to do on Saturday March
28th, 2015
“It is hoped that the content of this
book will stimulate a discourse towards finding an immediate solution in
pulling Nigeria out of the brink. Undoubtedly, the shortest way to succeed in
solving the problem will be to vote in 2015 for a president that is principled,
incorruptible, and with impressive track record. He should have the strength of
character to be able to lead by example. He should be a courageous patriot that
will crush Boko Haram within months
and thereafter, chart a new beginning for the Nigeria of our dream…..The
situation calls for a change from our present way of doing things to a new way
of doing things; from our present business-as-usual to a new business-as-never-before,
the details of which are catalogued this book”.  General Momah noted.
The book is
dedicated to founding fathers of Nigeria and those who laid down their lives
during the course of the war against Boko
Haram.
About General Momah
General Sam Momah was the Minister of Science and
Technology (1995-1999). He retired from the army after 36 years of meritorious
service. He is a graduate and post graduate of numerous tertiary institutions
at home and abroad including Royal
College of Defense Studies, London. He has PhD in Strategic Studies, a
Fellow of War College (Fwc), First Class Honors Degree in Civil Engineering, a
Fellow of Nigerian Society of Engineers, and a member of the National Institute
(Mni). The General and Gentle man was conferred with the National honor of Commander of the Federal Republic of Nigeria (CFR) in 1998.
Nigeria on the Brink is his sixth book. He has written in
the past, five high profile books, which are (1) Global Strategy; (2) Global
Disorder and the New World Order; (3) Technology
is Power, (4) Nigeria: Beyond Divorce and (5) Amalgamation of Nigeria—Mistake or a
Mission.
He is
happily married with five children, four of whom are practicing medical
doctors. His leisure is mainly reading, writing, fulfilling actively his role
as a public analyst and also, giving talks on contemporary issues in seminars
and conferences
Our Part on National Rescue Mission
Meanwhile,
your soar away Africa’s number 1 celebrity encounter blog Asabeafrika has received the instruction of the author of the book
“Nigeria on the brink” to start publishing the contents of the book for mass
readership across the world in order to make evident the ills at hand in our
nation and the necessary solutions at hand.
The
instruction which was given to this blog by General Momah through one of his Daughters, Dr. Amaka Momah seeks to make the content of the book bare to all
patriotic Nigerians home and abroad in order to help us make great decision
during the next election.
The series
from the book will start running on this blog from Monday March 23rd.
Join us as we release the book “Nigeria
on the brink” in facts and details for your benefit on Asabeafrika blog. Stay tuned.

Why many glorious Children have bad mothers = Dr. Aladekoye

As Buhari Collates Men And Women With Clean Hands

“Ojugbele was at home at the time she was alleged to...