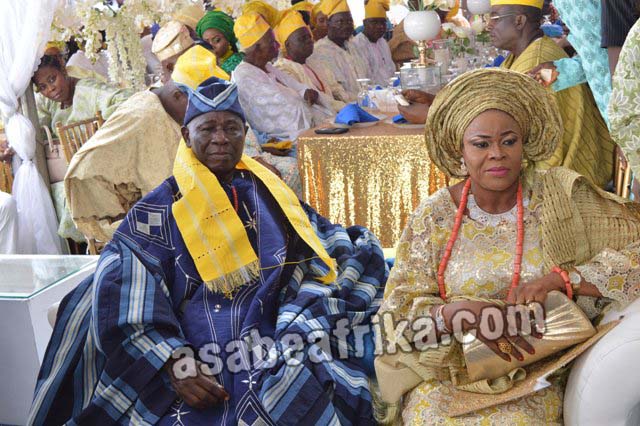 Last week, this blog published
snippets from the Thursday August 25th and Saturday August 27th,  2016 nuptials of  the daughter of Veteran Publisher and
Political Icon, High Chief Abiola Ogundokun,  Uyioghosa’s
to one Osagie Elaiho, the son of
a Benin, Edo State (Southern Nigeria) cultural icon and fine art designer, Chief Jerome Ikponmwoghodua Elaiho who is the founder of Jeromelaiho Printing Press at his FESTAC,
Lagos mansion and Arch Bishop Vinning Memorial Church, GRA-Ikeja, Lagos.
However, on Thursday, October 20th,
2016, your soar away Africa’s number 1 Celebrity Encounter blog, Asabeafrika witnessed another celebration
inside the Iwo born politician’s
home as people from all walks of life stormed FESTAC for the traditional
marriage of Oluwafunmilayo Oyindamola, another
of the Chief’s pretty daughters to Ikorodu born legal practitioner, Barrister Olayinka Afeez Olokun-Ola.
Barrister Afeez
Olokun-Ola is the last born of late Alhaji Yisa Olayiwola Olokun-Ola of
blessed memory and Alhaja Lateefat Ajoke
Olokun-Ola, a retired Civil Servant and manager with the defunct National Bank of Nigeria. The
traditional marriage which had the cream-de-la-cream of royalty from Iwo town in Osun State (Bride’s father’s
place) and Ikorodu town in Lagos
State (Groom’s parent’s town) was colorful and well planned. Asabeafrika is official blog for the
event.  Enjoy the snippets.
The Venue…
Unlike what
took place on August 26th during Uyioghosa Ogundokun’s traditional marriage to Benin Prince Osagie
Elaiho, Chief Ogundokun’s Festac Town residence wore a brand new look
on Thursday, October 20th when Afeez Olayinka came to ask for Oyindamola’s
hand in marriage.  Apart from the entire
building which had its exterior re-branded in a new grey color, the entire
compound was rebranded and turned into an event atmosphere. Analysts who
attended the event quickly concluded that High Chief Ogundokun literarily
brought the prestigious Eko Hotel  (in the Island side of Lagos) into his Festac
town home as guests who attended the ceremony wondered how the wedding planners
were able to re-work the entire compound into a mega-event center. Right from
the blend of colors on the neatly arranged chairs and tables down to the
concert-like designed couple’s stage up to the aesthetics of the entire
ambience, the venue was nothing but colorful and classy. Venue decoration was
handled  by De-Posh Event Center
under the leadership of Banke Kilani. Entertainment was
supplied by classical music band, Kick Rhytm led by Bamidele
Abiodun while DJ Aremzy (The Magnificent) ran the
turn table.
Meet the Couple…

Meet the 2nd in command to
the Oluwo…
Many people
who knows this aged man in Iwo land says he is the first and
last man to see the Oluwo of Iwo His Imperial Majesty, Oba
Abdul-Fatai Adewale Akanbi when he wakes to the palace
and the last man to see him when he closes all traditional activities for the
day. His name is Alhaji Yekini Orobimpe, the Oosa of Iwo land. He is
reputed to be the 2nd in command to the Oluwo of Iwo land. The Oosa was
at the event and was the one who commandeered other members of the Oluwo-in-Council
whenever the need arises. Alhaji Yekini Orobimpe is a
septuagenarian.

Why Elerin of Erin Osun stormed event with his Arole
His Royal
Majesty, Oba Yusuf Omoloye Oyagbade, the Elerin of Erin-Osun in
Osun State is a very revered traditional ruler in his domain. Apart from being
very close to power brokers in Osun State, the Elerin is very dear to High
Chief Abiola Ogundokun. In year 2006, the Elerin
bestowed Chief Ogundokun with the traditional title of ‘Apesin-Ola
of Erin Osun’. On that very special occasion in Erin-Osun land, the late Ooni
of Ife, Oba Okunade Sijuade (Olubuse II) and ex-Governor Olagunsoye
Oyinlola attended. They were both present. The former Deputy Governor
of Osun State who later became Nigeria’s minister of Defense (State) Chief
(Mrs.) Erelu Obada was also in attendance with other eminent Nigerians
including Fuji Music maestro, General Kollington Ayinla who
performed at the occassion. The Elerin of Erin Osun stormed FESTAC
town on Thursday October 20 with his scion, Prince (Alhaji) Omoloye Adeola.
(Watch out for Part 2 of Yinka/Oyinda’s Nuptial on this blog)