Last
Saturday December 5 was a ceremonious day and date for Comrade Olaniyi Abolaji
Olaonipekun, father of the late Oladapo
Olaonipekun aka Dagrin,  who happens to be Nigeria’s first Yoruba
Indigenous Rapper who died in April 2010 after a ghastly nightly motor accident
in Lagos while returning from a private event.

Comrade Olaonipekun was crowned as the Balogun of Alabelapo Land
in Itori in Ewekoro Local Government Area of Ogun State by the traditional
ruler of the land, His Royal Majesty,
Oba (Dr.) Adeola Ishau Balogun,

the Olu
of Oluke Orile in Itori Ewekoro LGA, Ogun State. The event
which started by 11pm was full of traditional celebration and prayers as Comrade Olaniyi Abolaji Olaonipekun was
later installed as the Balogun of the land amidst pomp and
celebration. Oba (Dr.) Adeola Ishau Balogun later told a teeming crowd of
guests and well-wishers while delivering his speech that Comrade Olaonipekun had not only brought development to the land
through his notable ventures as a leader but has also contributed to the
development of the youth of the community through various idea based activities
hence his decision to crown him as the Balogun
of Alabelapo land, Itori. 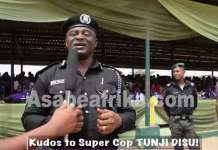