In this new broadcast, we took the courage to find new lines to analyze factors responsible for the Saturday September 19, Year 2020 victory of Edo State Governor, CHIEF GODWIN NOGHEGHASE OBASEKI at the poll despite the huge political warfare launched at him by his political godfather and predecessor, Comrade Adams Aliyu Oshiomhole.

Adams Oshiomhole who got into power twelve years ago on the backdrop of ending political Godfatherism in Edo State (After killing the political hegemony of the Igbinedions) later became a political monster as he tried holding unto the reigns of power for alleged selfish reasons even after Obaseki succeeded him.

However, the Governor, his Godson, kicked against such insidious tendencies.

Obaseki, due to his doggedness was frustrated into political exile as he dumped APC and joined PDP.

His Saturday September 19 victory is largely seen by political pundits as a miracle in the history of gubernatorial elections in Nigeria.

We recorded a ‘Thank You to the People of Edo’ video and issues raised in the video are same issues why every rational minded Nigerian wants GODFATHERISM in politics abolished.

Find out more in this clip. 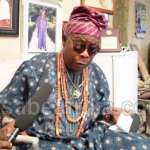 Crazy Things I Discovered as a Female Guber Aspirant in Ogun...