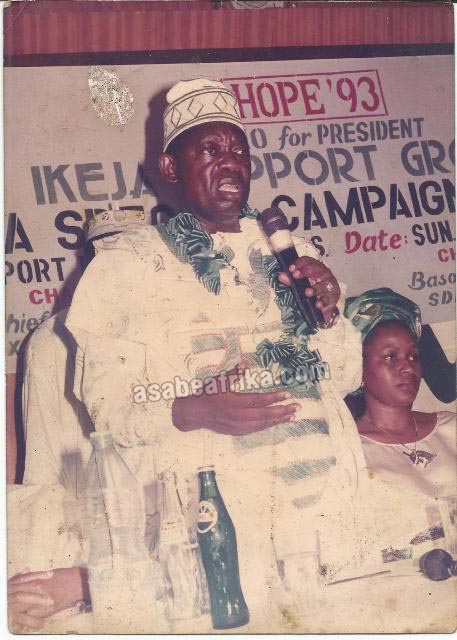 “How can you say that the military government is
behind the Association for a Better Nigeria? It is highly irresponsible to make
claims without facts”
After this stem
response, Moshood moved away from the journalist who had approached him
at the local airport in Lagos. The presidential elections were just three weeks
away. The Association for a Better Nigeria, a group headed by a man
called Arthur Nzeribe, had been touring the country and claiming that
it was gathering signatures of millions of Nigerians who did not want the
presidential election to hold. One of Moshood’s confidants, who had witnessed
this brief encounter with the journalist, waited for them to enter the car
before he solemnly declared. “I think the
journalist has a point. Who else, apart from the military government, can be
behind the mischief being perpetrated by the Association for a Better Nigeria?”
He added with an angrier tone. “If the
government was not involved, these people would have been stopped by now. You
have to take a stand and issue a public condemnation”
Moshood smiled and
after a short silence, he asked quietly, “Who
should I condemn?; the puppets or
their master?” His voice was faint. “My
enemies want me to be distracted from my campaign by a war with faceless
individuals. Trust me, I know exactly what I am doing” He was getting
angry. “Besides, any condemnation from me
at this critical stage will be interpreted to mean that I don’t believe in this
transition program, which will wipe its credibility away”
There was a long
silence. His temper was still rising. His confidant had another idea. “Since you agree that members of that group
are mere puppets in the hands of the military, don’t you think it would be a
good idea to reach out to lower, but still influential soldiers in the army?
Making them offers worth their while in your government will ensure that they
stand by you in case their superiors move against you in the future”
His statement
made
Moshood want to laugh despite the seriousness of the atmosphere. He
sighed then uttered. “You are asking me
to put the cart before the horse. Now let me ask you a question. If somebody
sets a trap for you, will you be foolish enough to deliberately fall inside
it?” He paused. The other man seemed puzzled. “I know many junior officers in the army but I will not reach out to
any of them before the election. I don’t want to give their mischievous
superiors a chance to accuse me of trying to overthrow the military government.
The election will be held, don’t worry, and by the time I win, no one, or group
of people, can stand in my way”

“He pursued his ambition aggressively and
relentlessly. He ignoring the Association for a Better Nigeria but one day he
received alarming news that made him distraught. A man named Abimbola Davis, on behalf of the Association for a Better Nigeria, had
gone to a court in Abuja, Nigeria’s capital, with signatures of some Nigerians
to file a case for the court to stop the presidential elections”.

In the next few
days Moshood
increased the tempo of his campaign. His main focus was on the practical steps
that he would take to transform Nigeria. He still had a lot of faith in
privatization and wanted it to play a central role. Speaking on this topic, he
once declared, “Government will no longer
have to fund the survival of dying national enterprises with monies needed to
rehabilitate old infrastructure and build new ones. Companies that are better
managed by the private sector will be sold instantly”. He knew that workers
in these companies would panic, so he assured them. “But no sale of these companies will happen without considering the
interest of the workers … After all they have toiled for these companies and
their labor must not be allowed to go in vain”
His plan to
implement a progressive form of taxation, though, was unsettling to the rich.
During the latter part of his campaign, he had pledged to ensure a strict
adherence to taxation based on income. He knew that being an accountant would
make it easier for him to implement this plan. Elaborating on this matter, he
once explained passionately, “The rich
have to give to the poor what is due to them for a society like ours to
flourish. But since most of them are unwilling to give on their own, my
government will tax them effectively to give the poor their dues by using these
funds to provide and preserve badly needed infrastructure”
In reaction to
fears from some people that such a policy would lead to capital flight, Moshood
snapped, “Let them fly their capital
away. By the times we set things right and foreign direct investment flows into
Nigeria, they will see foreigners reap enormously from the opportunity that
they left behind” He smiled then cracked a joke. “You see, once democracy is firmly on ground, our country will not
only be an investment haven, it will also be like a place from where an
investment is made in heaven”.
Another set of
fundamental plans that Moshood had for Nigeria was in the
agriculture sector. Describing the importance of agriculture, he once declared
with a warning tone, “A nation that lacks
the capacity to feed itself can neither enjoy internal stability nor full independence
from other countries”
To support that
statement, he went further to say that Thomas Jefferson, a former American president, once described
cultivators of the earth as the most important people in the world. But Moshood,
unlike numerous agricultural experts then, did not believe that the best way to
improve the productivity of Nigerian farmers was by forcing them to use
tractors. He believed that some of the soils in Nigeria were too weak to bear
the load of tractors. According to him, the best strategy was to encourage
foreign investors to participate in Nigeria’s agriculture, using their capital,
and most importantly, their knowledge of fertilizer and chemical utilization
with the aim of boosting output. The campaign was intense and exhausting. Moshood
remained healthy most of the time as he toured many parts of the country as he
had planned from the onset.
But there was
always a shadow that cast fear into his heart. It was the activities of the Association
for a Better Nigeria. Upon his arrival in some states, he was told that
some of the association’s members had just left. He would be taken aback at
first but after a short while, the effect of such bad news transformed into
more determination for his campaign. It was as if he wanted people to buy more
into his nationalistic idea of transformation so that he would be able to rely
on them in the future to defend him against the military regime.
He pursued his
ambition aggressively and relentlessly. He ignoring the Association for a Better Nigeria
but one day he received alarming news that made him distraught. A man named Abimbola
Davis, on behalf of the Association for a Better Nigeria,
had gone to a court in Abuja, Nigeria’s capital, with signatures of some
Nigerians to file a case for the court to stop the presidential elections.
(Excerpts from the book, The
President Who Never Ruled by Jamiu
Abiola; get copies in any book shop
across the world or write Jamiu Abiola through [email protected]. Read MKO Abiola’s 5 un-used Economic Theories
in
our next post on this blog)

Stop rushing to crusades, work instead before prayer — Prophet Tibetan

The Valentine Blues: Women of valor on Love, Romance and Perseverance