PRINCE (DR.) OLUSEGUN ALADEKOYE is one of those rare beings forced by the hand of destiny to serve humanity in a very different way.

Right from a younger age, he dreamt to operate big in life as his peasant father wanted him to become either a lawyer, Doctor or Engineer or better still a teacher.

The circumstances were quite rigorous as different phases of life kept playing out on him as he later grew to study Business Administration at Yaba College of Education after series of other educational pursuits.

He was employed at the prestigious American International Insurance Company (AIICO) after graduation but some esoterically unexplainable events hunted him out of Corporate Nigeria until he gave his life back to what destiny had in stock for him, IFA THEARTRE PRACTICE.

When Asabe Afrika TV met him on Thursday 6th of January 2022, he told us the story of his life from the humble Ikale Kingdom of Ondo State (South West Nigeria) down to Lagos.

The traditional medicine expert who has used his gift of medicine to help several people home and abroad spoke on the role of mothers in the destine shaping venture of star children and how many glorious children have the misfortune of a very bad mother in life.

Dr. Aladekoye who also studied theology has more in this PART 2 of his exclusive interview with Asabe Afrika TV. 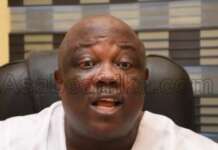 At 80, I have swallowed Lions who wanted to swallow me...

Why Ladies Are After Me – Bola Oyin Adejobi