Customarily,
love is thought to be two hearts beating as one. What then defined the enigma
of Abubakar Bello Masaba was an
uncanny skill to stir and replicate such heartbeat in multiple dozens of
liaison, sustaining the magic till he drew his last breath penultimate Saturday at a time the society had otherwise come under what
could be termed an epidemic of divorce.
As the remains of the nonagenarian were finally lowered into mother earth hours
later in his native Bida after a
clearly remarkable career in uncommon polygamy, what has unwittingly been
unveiled is a record unparalleled in Nigeria’s recorded history, the surpassing
of which would be Herculean indeed for future challengers.
His brood consists of no fewer than 187 children.
His fabled harem of over 100 wives is located in a nondescript, colonial-style
two-storied building in Bida.
Literally, he owned the lock, stock and barrel.

In one of his rare interviews, he revealed his recruitment strategy on BBC in 2008: “I don’t go looking for them, they come to me… I’ll consider the
fact that God has asked me to do it and I’ll just marry them.”

Doubtless, countless lotharios exist within Nigerian borders whose clandestine
exploits over the years, when aggregated, would make Masaba’s look like a child’s play. But not many had his honesty to
openly declare their interests, nor the courage to assemble their conquests
into a single community with an identifiable address.
The closest anyone had come would be in faraway Saudi Arabia. A wealthy business tycoon, Saleh Al-Sayeri, is reputed to have formed the habit of keeping
dozens of wives, even though he hardly remembers the names of most of them. But
officially, he acknowledges four, to obey Islamic injunction which imposes a
ceiling of 4.
Even at that, Al-Sayeri still relies
on an ingenious mathematical formula of elimination by substitution. In the
past two decades, he says he has kept three as constant but shuffles the fourth
candidate yearly. His cheeky explanation: “It’s
the one for renewal… I like to change my fourth wife every year”,
But, not Masaba.

For as long as anyone could remember, the maverick Islamic teacher and traditional healer had cultivated and nurtured
a mammoth harem. At the last count, the population was put at at least 100. His
legend grew not so much from his stamina to sustain a seemingly boundless
matrimony, but obviously more from the equanimity and fortitude he showed in
the face of tribulation and persecution suffered for his marital preference.

A vivid example was the run-in he had with the Niger Sharia Council in 2008, eventuating in his imprisonment for
the sake of love. At different times, influential institutions like Jama’atu Nasiru-Islam (JNI), the Bida Emirate Council and Islamic leaders
had enjoined him to either dissolve his harem then put at 86 or winnow the
number to 4. Masaba bluntly refused.
He opted to go to jail instead.
Typically, assorted apocryphal tales were soon spread by enemies to discredit
him. One said he usually charmed vulnerable women seeking healing with juju before putting them in family way.
So, it would then seem his teaching and healing were not just touching hearts; they
touched lips as well.

But in a rare show of conjugal solidarity in shared adversity, 57 of such women
later staged a parade and solemnly declared that they married him on free will
and could not be happier in their marriage. They attested he was not just a
good husband, but also a fantastic father.
With that, the authorities no longer had a strong excuse to keep him in
custody.
On return from jail, Masaba never
failed to continue exhibiting his accustomed grace under choking pressure from
the immediate community, defiantly announcing instead a resolution to keep
expanding his harem, only warning traducers who persisted were courting God’s
wrath.

His words: “I’ll keep marrying them
as long as I’m alive. Whoever is fighting me because of my wives or love life,
such an individual has missed it. Left for me, I would have married maybe two
wives, but I’ll keep marrying till the end of time. I just want to advise those
fighting against the number of wives to stop because such people are waging war
against God, their creator”.
Ordinarily, a household of hundred wives and over hundred children of
voting age should constitute a formidable bloc – or what more Americans are
learning to revere as “electoral college” – to, at least, swing
electoral victory in the locality, if not bargain for political concessions at
higher level. But despite his ordeal at the hands of both secular and spiritual
authorities at some point, Masaba was
never known to have openly flirted with any political party out of vendetta or
in search of protection.
Since the trustees of the faith he professed seemed unwilling to reconcile with
him till the end, it may entirely not be too outlandish therefore to view Masaba’s marital doctrine more as a
cultural statement in the African
milieu. His preference would easily have lent itself to two disparate
interpretations: either positively as an expression of the values of sharing
and accommodation indigenous to Africa
or negatively as the vulgar way a man could display his material abundance. In
traditional society, a man’s affluence used to be measured by the size of his
harem.
At 93, the super polygamist of Bida
could not be said to have died prematurely in a country where life expectancy
is a miserable 47. Regardless, the pain his passing brings is the nuggets of
lessons not shared, both macro and micro, corporate and individual. Despite his
extra-ordinary accomplishments and the long years he lived, he was not known to
have gathered or documented his experiences to benefit researchers or the
posterity for that matter.

For instance, we would never know the management principles Masaba adopted to run his extra-large
household. It surely required wizardry in financial matters to sustain such
multitude under a roof. Each time economic recession beckoned over the years,
what fiscal policy did he resort to, to ensure no wife stayed hungry or kids’
school fees unpaid?
Had he written a book, such would definitely have been strongly recommended to
political leaders of contemporary Nigeria
to borrow one or two leaves not only in the husbandry of material resources,
but also in the management of human diversities.
Masaba selected his women from many
ethnic nationalities. He might have had a few runs-in with authorities; but we
never heard police regularly visited his home to settle quarrels or fights.
With that, he and his clan undoubtedly provided a model in peaceful
co-existence. Today’s leaders who revel in fanning the embers of division –
whether sectarian or political – would also need to learn from him the virtues
of tolerance and inclusiveness.
On the other hand, even if only out of curiosity, I imagine young men of
nowadays would have sought Masaba’s clarification or guidance at a time when
not only the marriage institution is increasingly undermined by upsurge in
divorce, men’s virility is also being redefined by an explosion of indulgence
in performance-enhancing substance hawked at the street-corner.

In a veiled reference to virility, he told another interviewer: “A man with 10 wives would collapse and
die, but my own power is given by Allah… That is why I have been able to
control 86 of them”.
With such breath-taking outlay, some might want to further ascertain, even if
only for academic purposes, whether the great Masaba still had any appetite left to look outside.
If Masaba then relied solely on God’s
power to service his harem, many would have wanted to find out whether he kept
a roster. If there was, was it cast in stone or subject to revision
periodically? In the first place, was it imposed by fiat or benefited from
vigorous debate by every member of the harem before being ratified in the fine
tradition of democracy?

And most symbolic of all, the old soldier of intimacy chose to take a bow on
the eve of February, the acclaimed
season of love, whether Agape or carnal. 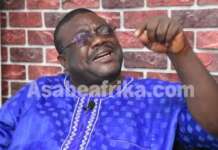 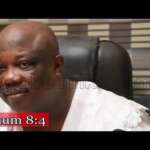 The shame of a diminished Senate By Louis Odion, FNGE

Tithe is a Poison if the man of God eat it...