Three years
after I started school, tragedy struck in December 1957. I was then 11 years
old. I was just about to begin the Senior Primary School in Jada as a boarding pupil. My father
drowned while trying to cross a small river known as Mayo Choncha on the outskirts of Toungo, a neighboring town. The river was in high tide following a
heavy rainfall.
Father’s
body was recovered the following day and buried in Toungo according to Islamic
rites. He was less than 40 years old when he died. I built an Islamic Primary
School at his burial site years later to immortalize him. He was a simple, hard
working, kind, honest and God fearing man. I will forever miss him.

After my
father’s death, the task of raising me fell on my mother, Aisha Kande, and her childless sister, Azumi, as well as my father’s extended family members in Kojoli. Although people were generally
kind and caring towards me, it was difficult for relatives to feel the vacuum
left by my father. As such, I was often sad and lonely. Father’s death pained
me greatly.

I resolved
to work hard, remain focused and successful in life to make my father proud. I
was sure that he was somewhere watching over me. I did not want to disappoint
him. I wished father had lived long enough to see the benefit of Western
education in my life.
My early life in Yola…
After
completing my primary school in Jada
in 1960, I was admitted into Adamawa
Provincial Secondary School in Yola.
I joined 59 other young boys from Adamawa
and beyond in January 1961 to begin a five year high school journey. The
school’s motto is ‘Tiddo Yo Daddo’, a Fulani aphorism for ‘Endurance is Success’.
It reminded us daily the success in life would only come to those who worked
hard and persevered.
Adamawa Provincial Secondary School, like others in the region, belonged
in the second category of post-primary institutions in Northern Nigeria. The most prestigious schools
were the Government Colleges in Zaria
and Keffi. Pupils who excelled in the
entrance examination went to the Government Colleges;those who did reasonably
well went to the provincial secondary schools; average students were sent to
the craft schools in the various Divisions; and those who failed the
examination were sent to farm Centers which were established in all the
Districts.

It was a good system which took care of everyone irrespective of his
or her level of intelligence.  The system
left out no one. The Native Authorities
ran the schools as a social service. Students received free uniforms (white
shorts and shirts for classes, khaki
overall for manual work and white caftans over white trousers for visits to the
town on Fridays and Sundays), free books, free boarding facilities, a weekly
allowance of three to six pence, and transport fares for those traveling
outside Yola and Jimeta at the end of every term. Some district councils would
chatter a commercial lorry to pick up their holiday-bound students from the
school.

The school
authorities mostly British, were firm
and strict, commending good conduct and academic excellence and sanctioning bad
behavior, sloppiness and poor academic performance. Refusal to do one’s homework,
rudeness to a teacher or senior student, dirty uniform and slipshod appearance
attracted light punishment (canning or manual work)while serious offenses such
as stealing, drinking, smoking, insulting or fighting a teacher could lead to
dismissal or “detention”. “Detention” meant that such a student
would not be allowed to visit the town on Fridays and Sundays with other
students. Since we all looked forward to going into town, everyone tried to
avoid committing offenses that could lead to “detention”.
I belonged
to Wazirawa House. I was not quite
six months in the school when the school principal, Mr. David West, warned me
that I would be expelled from the school if I did not stop fighting with
people. I was quite, but I would never run away from trouble. As a keen hockey
player, I was always with my hockey sticks and did not hesitate to use them
against any student who tried to bully me. In addition to hockey, I played
soccer and did well in athletics too. One important tradition at Adamawa Provincial Secondary School in
the 1960s was the Friday visit to the Lamido
of Adamawa. On the first and last Friday of every term, all the students
would march in their white-caftans-on-white-trousers
from the school campus in Jimeta to
the Lamido’s palace in Yola, a distance of about 5 kilometers,
to pay homage to the traditional ruler and spiritual head of Adamawa Emirate.
Lamido Aliyu Musdafa, a former student of the school had
been installed in 1953 as the 11th ruler of the emirate which was
founded by Modibbo Adama in the 19th century. The eponymous Adamawa Emirate and later Adamawa State are named after him. In
1841, Modibbo Adama had selected Yola, located on a swampy plain near the
Benue River, as his headquarters.
As soon as
we were ushered into his presence, Lamido
Musdafa would receive us, pray for us and counsel us to embrace the good
old values of hard work, honesty, and the fear of Allah.
In school, I
had friends from everywhere. Some of my friends were non Fulanis and non Muslims. As I grew older and more independent
towards the end of my stay at Adamawa
Provincial Secondary School, I used to spend part of school holidays with
my friends in different parts of Adamawa
Emirate. I wanted to be exposed to other cultures and experiences.
I have
always worked for peace and harmony among the Fulani and dozens of other groups in our area. When fellow
students wanted to set up Jada Students
Association only for the Fulani students and Chamba Students Association for non-Fulani
students, I addressed members of the two associations to form a central body
devoid of ethnic labels. They booed and shouted me down. I was not deterred. I
simply refused to join either of them. They later accepted my proposal to set
up Ganye
Students Association for all the students from the area. I gladly
identified with the new all encompassing association.
When I was
15, I spent my school holiday at home, working as clerk in Ganye Native Authority.
My boss was Adamu Ciroma, the then District Officer. From my holiday job
earnings, I bought a house for my mother in Ganye
the headquarters of the local government council. The thatched mood bungalow
had two rooms plus a kitchen and bathroom. It cost me about nine Pounds
Sterling. My mother was very happy and proud of me. I had saved her from
homelessness after her older brother sold the family house in Jadda without her knowledge.
(Read our next post titled
“Life as Kano-Kaduna boy” tomorrow in the story of the life of Atiku Abubakar) 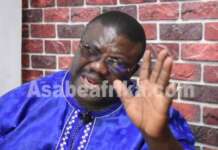 How Celebrity Lady, Bisket gave out 2 daughters in exclusive Dubai...

6 Reasons why today’s women don’t last in their marriage —...