“At
about the evening a gentleman dressed in a sanitary inspector’s uniform
arrived.  I was told he was a staff of
the Lagos City Council, but played
music on part-time basis.  He asked Brother
Ayo who I was. Brother Ayo said I was his younger
brother and that he would explain later.


Moses Olaiya looked at me and saw that my facial marks were
exclusively Ondo.  Brother
Ayo was from Ilesa.  ‘Ariya
Father, o fe pa ro fun mi?  Ki lo n sele?’ (Why are you lying; tell
me what is happening). Brother Ayo was forced to explain he
knew me in Osogbo and I came to Lagos
without his invitation.  The man who
would later become Baba Sala did not seem angry.  He only looked tired.

He
turned to walk away, but as he moved, I reminded him that he had forgotten his
cap.  He turned round to pick it and
thanked me.  Brother Ayo
seized the chance to inform him that I was a good drummer.  Baba Sala seemed impressed and
asked that I be brought to the venue of their gig that night.  The gig was billed for 11p.m and Baba
Sala rushed off to get some rest.
How I got a Baba Sala
job…
There
was no doubt on my mind that the band would hire me if I was tested.  And it did not take long to happen.  The band had only eight members and was
shopping for substitutes in case the first choices were unavailable. My
absorption was something of a miracle.
The drum I was employed to play was initially played by a blind man
named John Bull, who was also a singer.  Before my arrival, they had considered making
him concentrate on singing alone.
However, they could not take him off the drums because there was no replacement
yet.  I came, blew their minds and took
over the drums.

“We asked how the
group was going to be funded and Olaiya
said it must sustain itself, but might get support from the main band.  Life in the travelling theater was a
different ball game.  Sometimes, we
toured and got stranded because we were not making money.  We were not like Ogunde or Kola Ogunmola,
Oyin Adejobi, Ogungbe and others who were already big stars in the field”

Moses Olaiya treated me like a son.  So did the older band members.  In 1965, two years after my arrival, Olaiya
introduced a traveling theater.  I really
don’t know where the idea came from, but he started putting things together, I
suspect that the idea might have come from Ghanaian
man, Ajayi
Bukana, a friend of his, who was a good comedian.  He got some people from Ogunde’s group and others
from outside.  At the outset, it was said
we were all going to be part of it.  I
had no problem with that because I could act a little.  To my surprise, I was told to head the
musical arm of it.  This took me away
from the band.
We
asked how the group was going to be funded and Olaiya said it must
sustain itself, but might get support from the main band.  Life in the travelling theater was a
different ball game.  Sometimes, we
toured and got stranded because we were not making money.  We were not like Ogunde or Kola
Ogunmola, Oyin Adejobi, Ogungbe and others who were already
big stars in the field. Again, we were more of a comedy than a theater
group.  We just danced, told a story and
tried to make people laugh. But people preferred that on the radio, not on
stage.
Yet,
we managed to popularize the art, particularly with star comedians like Pa
Macaulay John, Alao Shaky Shaky and Ajayi Bukana (Shaky Shaky
+ Alao the Master Driver).  Bukana
was in our group and he was such a funny man.
He brought some good ideas and those who watched him went around telling
others. At a stage, it started to catch on.
Unfortunately
the 32 members of the band were acting as well as providing accompanying
music.  Most times we were overworked. We
were moving equipment, setting up the stage, dancing around the town where we
were to have a show to announce our presence and of course, performing.  By the time we were due to perform, we would
be too tired to give our best.  And once
the show was over, we would wait for the audience to leave and sleep at the
venue.  The next morning, we jumped on
the truck to another town where the ritual would be repeated.  The money we were making was barely enough to
take care of ourselves on the road. We performed in places like Ilorin, Jebba, Kaduna and Kano.
After each trip, I would go to Moses Olaiya, who never toured with
us, and tell him about our experiences.
After
a while, Olaiya ordered that I should come back to the main band.  On the night I returned, we played at Palace
Hotel in Lagos.  It was the next building to where the
headquarters of the United Bank for Africa is now standing.  We made money on that night and in subsequent
shows.  Olaiya was not a greedy
man.  Whatever we made we shared.  Sometimes we would not make enough money and
whenever he received his salary, he would give us two guineas to share.  That was two pounds and big money in those
days.
(Excerpts
from the book; KSA: My Life, My Music by
King Sunny Ade. Read ‘How I got admission into University of
Lagos’ tomorrow on this blog) 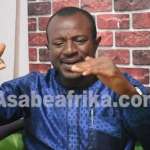 Joke of the Day: You will sleep with her again

The KSA Memoir: Why no woman ever lived with me under...