In
planning a successful Christmas Party or for most festivals, toilets are not
usually the first thing in the minds of most organizers.  This is why
Harpic, Nigeria’s No. 1 toilet cleaning brand from the stable of Reckitt
Benckiser (RB) has reechoed the need for Nigerians, even at this yuletide
season, to look beyond the need for cozy facilities and quality food and include
clean toilet facilities, as the tempo of celebration mounts into Christmas and
the New Year.
Commenting
on this while analysing the impact of the just concluded World Toilet Day
celebration, Reckitt Benckiser’s Marketing Director-West Africa, Mr. Oguzhan
Silivrili said, “The availability of clean toilets should be an issue in a
festive season like this, especially against the backdrop of over 32 million
Nigerians not having access to functional toilet facilities and defecating in
the open even in normal times. With this season’s daily merriment, drinking and
eating, this challenge will definitely expand”.
Harpic,
one of RB’s power brands has consistently put on the front burner the
importance of having access to clean toilet and the potential health
implications as well as the vulnerability it poses, especially to Women and
Children.

At
this year’s World Toilet day held at the Idi-Araba Community and Idi-Araba
School Complex, Mushin, Lagos, Oguzhan Silivrili who spoke at the event
explained that  consistent enlightenment of Nigerians has become quite
necessary because open defecation has multiple effect on the larger society as
it affects  living conditions resulting in increased Child Mortality,
Cholera, Diarrhea in addition to its considerable social costs which include
loss of dignity or risk of physical attack and sexual abuse. As a result,
Nigeria Loses N455bln annually which is 1.3% of the Nigeria’s GDP to poor
sanitation and hygiene which increases the risk of disease and malnutrition.
Silivrili
spoke further at the event: “This year, WTD is focusing on the link between
sanitation and nutrition, drawing the world’s attention to the importance of
toilets in supporting better nutrition and improved health. Lack of access to
clean drinking water and sanitation, along with the absence of good toilet
hygiene practices, are among the underlying causes of poor nutrition. The aim
of World Toilet Day is to raise awareness about the people in the world who do
not have access to a toilet, despite the fact that it is a human right to have
clean water and sanitation.”
He
also pointed out that Goal 6 of the Sustainable Development Goals is to ensure
access to water and sanitation for all. “Clean, accessible water for all is an
essential part of the world we want to live in. There is sufficient fresh water
on the planet to achieve this. But due to bad economics or poor infrastructure,
every year, fecal contamination of the environment is the root cause of an
annual average of 5,400 cases of cholera affecting Nigeria. Harpic has been in
the fore front of this campaign reaching 1,000,000 homes yearly across 16
cities within the country to educate consumers about how to keep a clean and
hygienic toilet
Also
speaking at the WTD event, Category Manager Harpic, Bamigbaiye-Elatuyi Omotola
stated that Harpic’s toilet hygiene campaign initiative builds on the strong
commitment already made by UN Member States. Her words: “ The “Sanitation for
All’ Resolution (A/RES/67/291) adopted by the United Nations General Assembly
in July 2013, designated 19 November as World Toilet Day. The Day is
coordinated by UN-Water in collaboration with Governments and relevant
stakeholders like Harpic”.
Prior
to the event, Harpic had a community engagement walk in partnership with United
Nations Information Centre, distributing fliers on toilet Hygiene and
Sanitation in addition to one-on-one sanitation awareness and education to
residents of Idi-Araba and environs on the need for better toilet hygiene
practices. Members of the community were also taught basic hygiene techniques
on how to maintain toilets, while Harpic demonstrated good toilet hygiene
practices and also donated two mobile toilets to the community.
Message
from the United Nations Secretary General, Dr. Ban Ki Moon was delivered by the
UNIC Director, Mr. Ronald Kayanja while a brief pictorial presentation of the
Sustainable Development Goals in relation to sanitation/WTD was equally
presented. 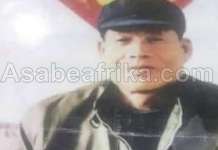 How to win One Million, Dubai Trip in Red Hot Promo