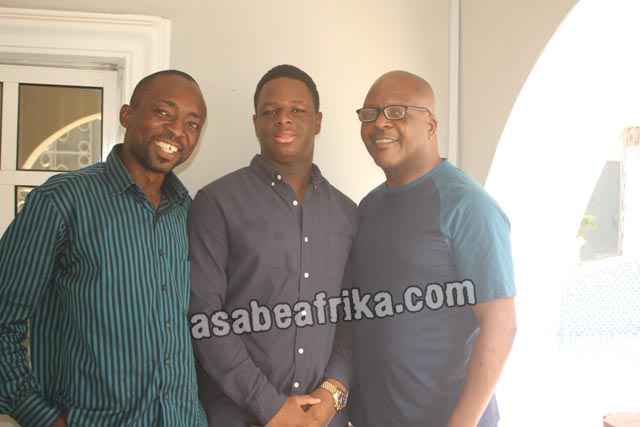 Spectacular, incredible and explosive
are three words that can aptly describe Isaac
Oluwashina Peters (Jnr.) famously
known as Clinton Peter’s encounter
with your Africa’s Number 1 Celebrity Encounter blog, Asabeafrika on Tuesday, July 12, 2016 when we met him by the side
of the multi-million Naira swimming pool facility in his parent’s Iju, Lagos—South West Nigerian mansion.

What about guitar?
To be
honest, I only want to play the Piano.

As an upcoming act that has seen a
bit of the industry through your legendary father, what would you like to see
done differently in order to enhance the potentials of the Nigerian
entertainment industry?
Well, the
entire industry as a whole is very funny I will say. Most managers and business
brokers are mostly interested in themselves and not the artiste. So, I feel
like most of the managers should be a whole lot more selfless instead of
thinking of their own thing at all times because in any way, they are still
going to get the money. They should worry about things like sound management
and crowd management. Make sure people don’t get hurt during massive shows and
ensure the total quality control and quality management of the artiste. It
should be the artiste first before the money.
You appear to me like someone who
reads widely. I am shocked at your depth of knowledge of issues and how you
share them. Can you tell me your favorite book?
Well, when
it comes to books, it is mostly books related to my course. But I will say I
have read some of the works of Bill Gate and Steve Jobs due to my
course. I read their autobiographies and I felt like ‘well, if they could do this without graduating, you could imagine what
I could do with becoming a graduate’. So, they inspired me a lot. I will
say their autobiography inspires me a lot.
Can you also share some of the
timeless lessons you have learnt from your dad and mum which guides you till
date?
Well, my mum
and dad always tell me to ‘remember the
son of who you are’. So, anytime I am doing something I always try to
remember my humble beginning. I try to remember where I am coming from. They
told me a lot of things and that have made me to equally realize that it is very
important to stay close to your root and stay grounded.
You have just released your own
personally written and produced single. What is the next step? Is it going to
be after your studies abroad?
Well, I
think I am going to do a little mix of both. I am going to focus on music
solely once I graduate. But I see no reason not to juggle it by the side. Rome
wasn’t built in a day even acts like Davido and Wizkid started from high
school and the University. So, I will continue to push my musical dream and maybe
when it is time; and hopefully that will be when I graduate, I will be one of
the biggest artistes around, God willing.
What is the name of your new single
album?
Well, the
name of my project is called The Summer Project and the name of
the Single is called Gbe S’oke. I am going to be
releasing that later this year and trust me; this is nothing you have heard
before. Trust me. (Sang the Song for us)
I think Gbe S’oke is dancehall music?
Well, it is
not really dance hall per se but it is groove-able and you can move your body
and wriggle your waist and just enjoy the melody and philosophy of the song. I
have quite a lot of other songs I am working on.
Do you have any hobby apart from
creating music?
Well,
besides the music, I indulge in hobbies like photography, fashion and I am into
Deejaying as well.
Men! You are just loaded? (Laughter)
Yeah, but
Music is my main goal. And I also play football during my free time and some
other sports as well.
What is your philosophy of life?
To be very
honest, this life is not forever. So, I feel like when you have the chance to
do the right thing or you have the chance to do good in someone’s life, you
should do it and live your own life in the best way.
Do you have prayer for dad and mum
due to their roles in your life?
Well, I will
actually tell them that I am really grateful to have them in my life and I am
grateful for their support and input in my music. Without them and GOD
Almighty, I wouldn’t be where I am today in terms of education. Without them I
wouldn’t be where I am going to be in terms of career in the next few years. So,
I can only pray that God will replenish their strength and prosper them for
greater exploits.  I am proud of my
parent.
Give your advice to people that are
going to embrace your music and become your fans all over the world?
To the young
African fans, they should let the
artiste be the artiste. It is not by force to do dance music or copy popular
craft. I want to say you should support every artiste and support their craft.

Nigeria uses money meant to develop her youths to keep them...