The
pains that almost invariably accompany the beginning of an exercise regimen are
as a result of microscopic tears in muscles and joints that have not been so
vigorously used for a long period of time. The advice is that apart from taking
it easy at the onset, some simple pain relievers like paracetamol should be
taken after each episode of exercise for about a week or two when post-exercise
pains usually recede.  And anytime you
feel concerned about the pains or anything else about your body during the
first few weeks of an exercise regimen, you should consult with your doctor
before continuing.  It may not
necessarily be something serious but consulting with the doctor will at least
allay unnecessary anxiety and prevent unanticipated severe side effect.

(From the Book; “Early and Sudden Death; the Price of
Affluence among Nigerians”. Read “5 ways out of high cholesterol, tobacco &
tips for exercise” in our next post on Asabeafrika) 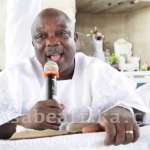 RULE 35: Work As If You Didn’t Need The Money