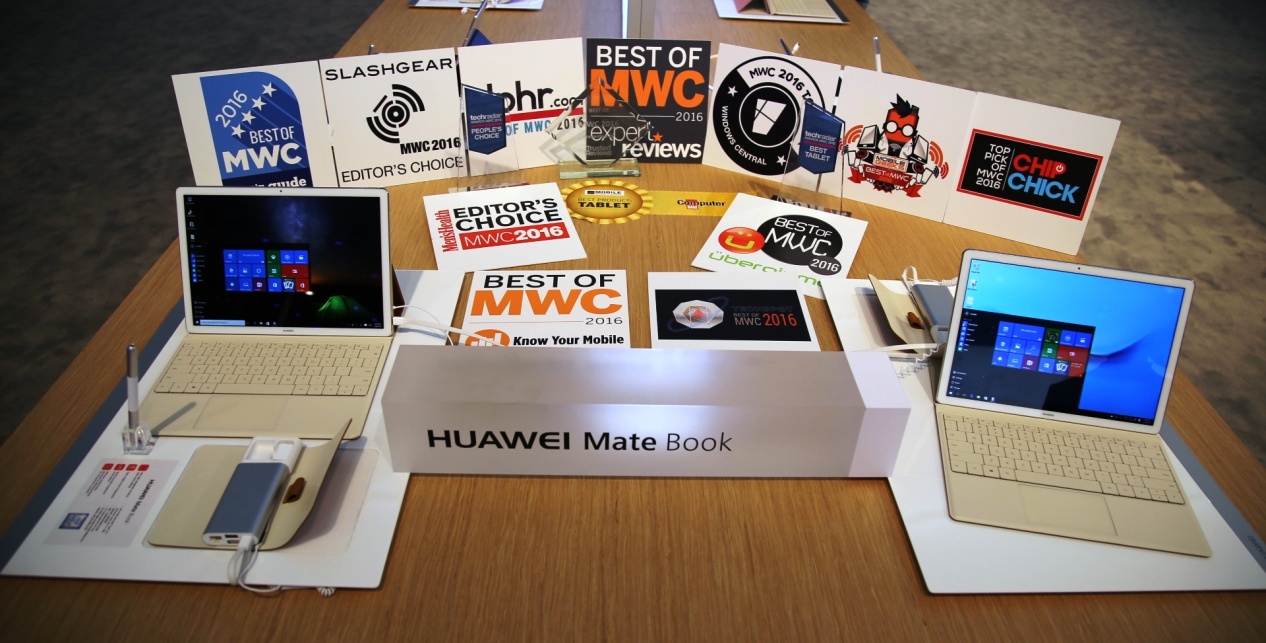 Full
details of each award are included below:
1.
Top Pick of MWC 2016 – Chip Chick
awarded the MateBook its “Top
Pick of MWC 2016” award for its premium
look, unibody with rounded edges and called the device “travel friendly.” Chip
Chick is a US-based online publication aimed at women to help them keep up with
the latest technology trends.
2.
Editor’s Choice
– Men’s Health awarded the MateBook its “Editor’s Choice” award. Men’s Health
is a leading print and online lifestyle publication aimed at men.
3.      Best of MWC – Mobilegeeks awarded the MateBook its “Best of MWC” award for
its hardware, calling it an impressive competitor to the Microsoft Surface Pro
4 and the Apple iPad Pro. Mobile Geeks is a German online publication which
covers smartphones, tablets, net / ultrabooks, apps and software, the Internet,
and gadgets.
4.      Editor’s
Choice – SlashGear awarded the MateBook the “Editor’s Choice” award, calling the design
“super-sleek” and highlighting the device’s hardware, including the fingerprint
sensor. SlashGear is a technology blog based in the US. The blog provides tech
gear news and the latest lifestyle trends, aimed at a global audience.

5.
People’s Choice – TechRadar ‘s “Reader’s
Choice” award went to the HUAWEI MateBook with 59% of readers voting the device best of
show. TechRadar is an online publication focused on technology, with news and
reviews of tech products, especially gadgets.

6.      Best Tablet – TechRadar recognized
the MateBook the “Best Tablet”, for its design, hardware (specifically the USB-C
charging) and the device’s accessories.
7.      Best of MWC
– TechSpot awarded the MateBook the “7.   Best
of MWC” award for its design and premium unibody. TechSpot is an online
publication covering computing and technology news, aimed at a global
audience.
8.      Best
of MWC – Tom’s Guide awarded the MateBook its “Best of
MWC” award. Tom’s Guide is a US-based
technology-focused publication which also incorporates Laptop Mag.

9.
Best of MWC
(MateBook & MatePen) – Ubergizmo
awarded the MateBook and the MatePen a “Best of MWC” award, calling its
“industrial design” excellent and highlighted the device as “super thin, light
and efficient.” Ubergizmo is a US-based online publication focusing on
technology and telecoms. The blog is aimed at a global audience, with sections
for topics including mobile, gaming, Android and reviews.

11.
Best of MWC 2016
(Best 2-in1) – Alphr.com awarded
the MateBook the “Best 2-in-1” for the device’s light weight (especially
compared to the Surface Pro and iPad Pro), 10-hour battery life and
accessories. Alphr.com is a consumer technology outlet based in the UK that
reports on news, reviews, innovators and leaders who are doing amazing things
and changing the way people work and live.

13.  Best of MWC
2016 (Best Hybrid) – Expert
Reviews awarded the MateBook “Best Hybrid” for the device’s
light weight, “sleek” design, accessories and fingerprint scanner. Expert
Reviews serves as a technology buying guide for consumers eager to get their
hands on the latest technology. It also has a massive database of product
reviews that is updated on a daily basis.

14.
Best of MWC 2016
(Best Hybrid) – Know Your Mobile awarded the MateBook “Best Hybrid.” Your
Mobile is a UK-based mobile phone website that reports on the best and most
relevant smart and feature phones, tablets and mobile networks.

15.
Best in Show – Trusted
Reviews awarded the
MateBook “Best in Show” for its design, impressive display and array of
accessories. Trusted Reviews is a global media outlet that publishes expert
reviews, user reviews and news about consumer tech products.